The Women’s March on Washington is happening today. With 255,000 likes and counting, the official Facebook event has gone viral. Plus, a quick search on Facebook reveals hundreds of “sister events.” Whether they’re making the trek to the nation’s capital or protesting closer to home, attendees are leveraging Facebook to organize transportation, lodging and logistics. Yet, it’s Twitter that provides a clear lens into participants’ priorities. Built for real-time communication, Twitter shines during breaking news and pop culture events. Twitter is made for moments like the Women’s March on Washington. 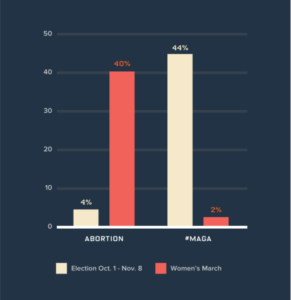 I teamed up with Cision to analyze social media posts related to the march to get a better sense of marchers’ priorities:

“According to Cision’s analysis of Twitter data, health is the overwhelming primary concern for marchers. In addition to abortion, healthcare and defending the Affordable Care Act dominate current online conversations, accounting for 68 percent of the march-related dialogue.”

Just as President Trump leverages Twitter to drive media coverage and shape the national discourse, presumably the Women’s March hopes to spark this same network effect as participants attempt to influence the national dialogue—and it seems to be working. While Twitter hasn’t amassed the user base as large as Facebook, it continues to play a critical role shaping national discourse.

Want to learn more? Please head over to Wired.com for the full article:

Why Women (and Men) Are Marching Today, According to Twitter Data